The Cabo Mayor Lighthouse, one of the most emblematic lighthouses in Spain, has embarked a technological evolution that has been reflected in its optical system throughout its history. Since it was set up in 1839, this lighthouse has integrated the technical advances of each era. Originally, this lighthouse was equipped with a set of Fresnel lenses made up of 100 upper and 60 lower mirrors, using oil as fuel, while in 1877 it became the first lighthouse in Spain to use mineral oil. In its recent history, the lighthouse had a catadioptric assembly that housed two incandescent lamps.

Currently, with the LED technology and its advantages, the Cabo Mayor Lighthouse aims to modernise its lighting operating system while preserving the historical value of its optical assembly. For this reason, it has entrusted the MLL1000 LED Lamp developed and patented by Mediterráneo Señales Marítimas.

Our technical team travelled to Cantabria to remove the old halogen lamps and install the MLL1000 LED lamp, which will offer higher optical precision and light performance than the old optical system of the lighthouse.

Thanks to the MLL1000, the Cabo Mayor lighthouse has managed to Keep its classic glass optics by taking advantage of the full potential offered by LED technology: a higher range with minimum power consumption, and a longer service life over 20 years.

With a single LED diode, the MLL1000 lamp generates a virtual light source at the exact focal point of the classic optical system, reaching 360º of light coverage and avoiding damages caused by the magnifying glass effect.

Therefore, the MLL1000 lamp is already working at full capacity in the Cabo Mayor lighthouse, where we have been able to verify that the range of its light beam has been optimized while preserving the original lenses of this historic lighthouse. 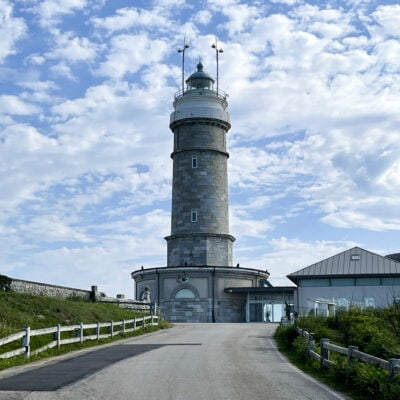